Reflux is caused by the backflow of stomach contents to the esophagus. The reason can be a weak sphincter muscle, at the transition between the esophagus and stomach, or esophageal hernia where the upper portion of the stomach is pushed up through the diaphragm to the chest cavity.

If you have an esophageal hernia, there will usually be a simultaneous dysfunction of the sphincter on the transition between the esophagus and stomach. An esophageal hernia that does not cause symptoms does not necessarily require treatment.

The mucosa of the esophagus cannot withstand prolonged contact with stomach contents, which is why there may be an irritation of the mucosa (esophagitis) that could be developed into actual acid burns and ulceration (severe esophagitis).

Endoscopy of the esophagus and the stomach (gastroscopy) will usually clarify if the condition is actually reflux and / or esophageal hernia. To rule out other diseases, it may be necessary to supplement with other examinations such as ultrasound-, CT-, MRI scans or X-ray).

The medical treatment is combined with the advice given above.

Antacids such as Link, Alminox, Novaluzid etc. all available over the counter, may in mild cases be sufficient treatment. The onset is within a few minutes and lasts only for approx. ½ hour. The effect can be enhanced by combining it with Gaviscon, which places a layer of foam above the contents in the stomach and thus reduces the backflow of acid into the esophagus.

If you have more severe symptoms, it is necessary to use acid-blocking medication that works by reducing acid output. There are different medications (Lansoprazole, Pantoprazole, Omeprazole), all of which are effective at reflux. The effect depends on the dosage and duration of treatment. These substances are very safe with a few and rare side effects even with prolonged treatment, and are therefore ideal for long term treatment.

In the majority of cases, medical treatment leads to significant improvements and often makes symptoms disappear completely. For patients with severe and chronic symptoms, surgery must be considered. Surgery is performed laparoscopic reinforcing the sphincter mechanism between the esophagus and stomach. You are usually discharged from hospital the day after surgery, and most people can resume normal activities within a few days. To achieve the best effect, BMI must be equal to or below 30.

Course of the disease

Reflux is often a lifelong condition where the symptoms can vary greatly. Most have shorter or longer periods with few or no symptoms. The most affected patients must constantly be in a high-dose acid-blocking therapy. The medicine reduces or eliminates symptoms but does not cure the condition. The only possibility of cure is surgery.

Complications of the disease

Prolonged ulceration and scar tissue can cause the development of stricture of the esophagus. The symptom is difficult swallowing. Mild cases of oesophageal hernia are treated with increased acid-blocking therapy. In severe cases it may be necessary to perform a balloon dilatation of the esophagus with a balloon lead down through the endoscopy equipment. Treatment is outpatient.

Many years of reflux can lead to a modification of the cells in the lower esophagus. The condition (Barrett's esophagus) is detected with tissue samples taken from the mucosa at the bottom of the esophagus. Barrett's esophagus may be associated with a slightly increased risk of developing malignant lesions. In order to control this condition, it must be monitored with outpatient endoscopy.

For simple, uncomplicated reflux the condition is monitored by your general practitioner. It is not necessary with repeated endoscopy in these cases.

With the incidence of severe reflux or complications of reflux (ulceration, stricture, cell changes), a suitable control program that fits your case is agreed upon. 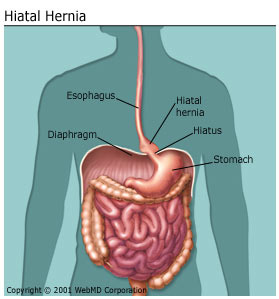 The figure shows an esophageal hernia where the upper portion of the stomach is pushed up above the diaphragm into the chest cavity.