In the gallbladder small stone formations may occur if there is imbalance between the amount of cholesterol, calcium and bile pigments. Gallstones in the gallbladder usually don’t give any symptoms. For that reason they are not considered a disease but rather a condition. If gallstones get stuck in the outlet of the gallbladder, there will be abdominal pain located in the upper right part of the abdomen. This pain is called a gallstone attack. 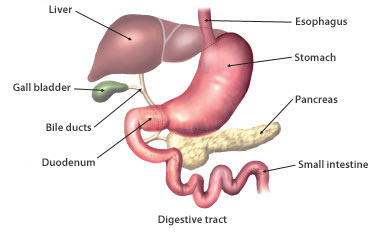 Anyone can get gallstones and the risk increases with age. In Denmark, one in five women and one in ten men get gallstones. It is believed that the high incidence of gallstones in the Western world is due to dietary habits and lifestyle.

Gallstones are rarely seen with children and adolescents.

Gallstones are often seen among people:

What are the symptoms of gallstones?

Two out of three people who have gallstones will never experience any symptoms. The last third will at some point have gallstone attacks.

How are gallstones diagnosed?

The safest way to detect gallstones is an ultrasound scan of the abdomen. This can be done by specialists in gastroenterology and radiology. Often it will also be necessary also to perform an examination of the esophagus, stomach and duodenum (gastroscopy) to rule out other causes of pain.

Ultrasound is performed in Raskovs Clinic

How are gallstones treated?

Random findings of gall bladder stones, where there hasn’t been any gallstone attack, do not require any treatment.

How is a gallstones attack treated?

At a sudden onset of pain in the stomach you should always seek medical attention. The doctor will examine you, give you painkillers and plan the next steps (observation/out-patient examination/ hospitalization).

If you can recall the pain from previous attacks, you can take painkillers. You may possibly add a warm dressing on your stomach (beware of scalding of the skin).

At repeated gallstone attacks, the gallbladder is removed by laparoscopic surgery. The procedure is gentle and leaves only small scars. At laparoscopy there is a small risk of damage to the bile ducts, which can be problematic. For this reason you carefully assess the reason for surgery and the method of surgery.

Yes, and it is important that you are evaluated by a doctor if the following occurs:

Acute inflammation of the gall bladder (Cholecystitis) is characterized by prolonged pain, fever and possibly nausea and vomiting. You should seek medical attention without hesitation as cholecystitis requires emergency treatment in the hospital.

Jaundice and biliary inflammation: yellowing of the whites in the eyes and on the skin, pale stools and dark urine. Prior to this there are usually symptoms like a gallstone attack. Fever with cold-chills is a sign that there are bacteria in the blood, and you must immediately seek medical attention/call ambulance, because the condition requires urgent treatment during hospitalization.