Who gets bowel cancer?

Bowel cancer is one of the most common cancers in Denmark with more than 4000 new cases each year. Five percent of the population is affected by bowel cancer, i.e. about 1 in every 20 individuals. The risk of bowel cancer increases with age and with bowel cancer or intestinal polyps in the family. 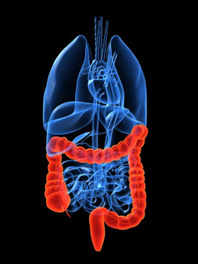 If you have had bowel cancer, large bowel polyps, breast cancer, cancer of the uterus or ovaries, the risk increases further. Other diseases that may increase the risk of bowel cancer is prolonged inflammatory bowel disease such as ulcerative colitis or Crohn's disease.

Denmark has adopted a population-screening for bowel cancer focusing on early detection in mind. The screening process is starting in 2014 and the target audience is between age 50 and 75.

What kind of screening is used?

Prevention-oriented screening: Colonoscopy (endoscopy of the colon and rectum) to find and remove intestinal polyps.

Early detection screening: Examination of feces for blood. At positive results, colonoscopy is carried out (this is the method that is introduced in Denmark from 2014).

Why screen for bowel cancer?

Bowel cancer is a frequent and very dangerous disease. It is a "silent" disease where the early stages rarely cause any symptoms.

When the "classical" symptoms of pain, bleeding and weight loss are present, the disease may already have advanced and will be difficult to cure. The average lifetime risk of bowel cancer in Denmark is approx. 5%, i.e. 1 in every 20 individuals. The 5-year survival rate for bowel cancer is approx. 50%. If you get cured, treatment might bring unpleasant implications due to surgical complications, side-effects to chemotherapy, radiotherapy, stomas, etc.

By screening for bowel cancer, the disease is either prevented or discovered in the early stages when chances of effective treatment and cure are possible for almost all (up to 90%).

Almost all cases of colorectal cancer occur in polyps. If polyps are detected and removed, bowel cancer can effectively be prevented. 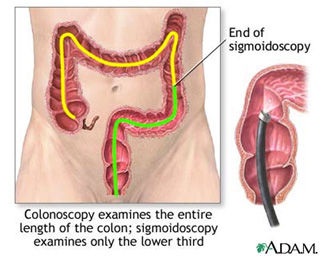 Who should be screened?

The risk of bowel cancer increases with age and sharply after the age of 50. Everyone between the age of 50 and 75 are recommended to undergo a preventive examination at regular intervals.

If you have a 1st degree relative (parent, sibling or child) with bowel cancer you should be examined from the age of 40.

If more cases of bowel cancer run in the family it may be hereditary. In this case it would be relevant to undergo preventive examinations every 2 years from the age of 25. At strong suspicion of hereditary bowel cancer you should maybe undergo genetic testing.

Women with a history of ovarian cancer or cancer of the uterus before the age of 60, should be screened for bowel cancer as early as possible.

Depending on the number and size of the polyps removed the interval between controls are determined. If once you have been treated for bowel cancer, the hospital will set up a control program. Colonoscopy will be offered at least every 3rd year.

If you have had inflammatory bowel disease (ulcerative colitis or Crohn's disease) for more than 10 years, you should, regardless of age, undergo colonoscopy with biopsies (tissue sampling) at regular intervals.

Who performs screening for bowel cancer?

Feces for blood samples can be performed by the general practitioner.

Colonoscopy and removal of intestinal polyps can be performed by specialists in gastroenterology, either in private clinics or in hospital outpatient clinics.

Are there any risks associated with screening?

There is no risk related to the feces for blood examination.

Risk of complications during colonoscopy occurs mainly in relation with removal of polyps and consists of bleeding or perforation (hole in the intestine). The risk is about. 1 in 2000 colonoscopies and may result in urgent hospitalization and operation.